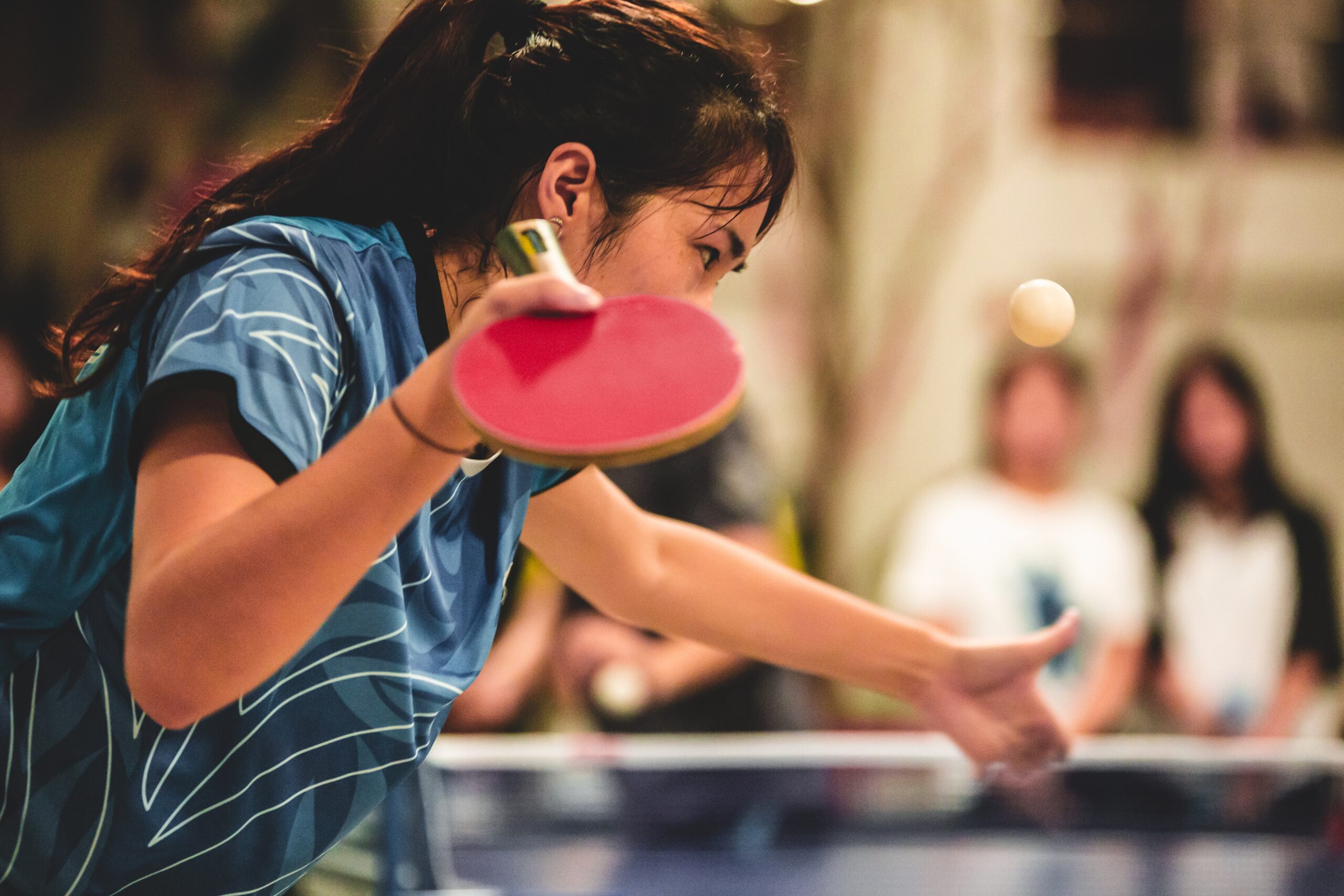 Table tennis is home to a ton of weird behavior. But why do table tennis players grunt? Some players do it while serving, others while playing the point. Even professional players do it, and we’re here to answer why.

Why Do Table Tennis Players Grunt?

Typically table tennis players grunt to psyche their opponent. Some players do it to synchronize their movement and breathing, like boxers! Others do it because they feel they get a better strike if grunting/exhaling when striking the ball.

Psyching is a big part of table tennis culture sadly, and grunting while playing is just another method of psyching. Players that grunt with the purpose psyching typically have a weak mind themselves. If you’re starting to get annoyed by an opponent doing this – do it back!

When players get tired, strikes get sloppy and grunts is the solution for some players. It’s just like people grunting in the gym – when you get tired you grunt!

Do a hard exhale while making a “huh” sound and you’ll see how your muscles tighten up, especially your core. The more audible you make the sound – the more your muscles will tighten.

This is also why tennis players grunt when striking the ball.

Why Do Table Tennis Players Grunt When Serving?

Grunting when serving in table tennis can have multiple thoughts behind it. Some players do it to psyche their opponent, but others do it to mask the spin or power of the serve. Experienced table tennis players can easily hear the spin of a ball when it hits the racket – masking it with a grunt is then a good idea.

Psyching is why a major reason to players grunting when serving. This is often mixed up with stomping to psyche the opponent even more.

When the ball hits the racket, you can often hear what type of spin the ball will have. Therefore, some players grunt just as the ball hits in order to mask the spin or power.

Are You Allowed To Make Sounds When Serving?

Yes and no. In a local league or non-professional games, the umpire probably won’t care. But in professional the umpire should call a let if the players make sounds during play.

Rule 2.09 – The rally should be a let if the conditions of play are disturbed in a way which could affect the outcome of the rally.

If the umpire doesn’t call a let immediately, the point is continued though. Stomping for example, is in a grey zone if it’s legal or not. It’s something you might not be able to control. But shouts and similar during the point is against the official rules.

Why Do Players Moan When Hitting the Ball?

Table tennis players moan when hitting the ball in order to gain more power. When moaning or making a loud exhale the muscles tighten up, thus making the strike more powerful. This is often seen in tennis, but has now somehow made it’s way into table tennis games.

Are You Allowed to Make Sounds During a Point?

No. Many non-professional games ignore this rule, but it isn’t actually allowed to make sounds during play. It should be an immediate let and the point should be replayed.

Are You Allowed to Make Sounds In Between Points?

Yes. You see the professionals doing it, so you can too. Nobody really knows what started the trend of making sounds while playing, but it’s now a rooted part of table tennis culture. Whether you like it or not, you have to find a way to deal with it. If you can’t beat them – join them!

The sounds and psyching in table tennis is only getting worse year by year. There were no grunting, cho-ing and wiping hands on tables 20 years ago. What was bad sportsmanship back in the day is now deeply rooted in table tennis culture.

Many trainers and professional players out there now suggest you do mental training. Not just for psyching, but for overall play. Losing a set to an edge ball is frustrating, but with a bit of mental training it will be easier to overcome.

Table tennis as a whole is going down a bad path when it comes to this part of play. Psyching is more and more accepted and it only gets worse year by year. We believe ITTF has to regulate this much better to improve the overall game experience.