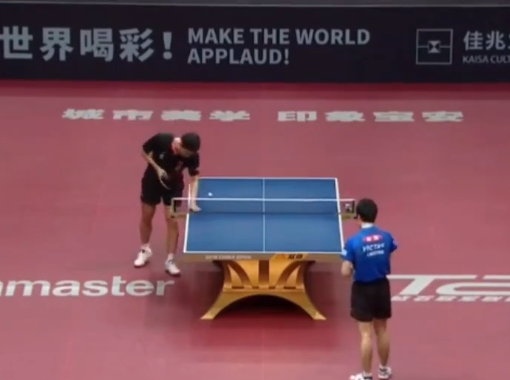 So why do table tennis players touch the table? Wiping their hands near the net is very common, especially in professional games. We will explain the reason to table-touching in this short article.

There are multiple reasons players touch the table, and here are a few of them:

Why Do Table Tennis Players Touch the Table?

Table tennis players touch the table for multiple reasons, but the main one is to wipe their hands. This is then done on the table instead of on a towel because that is only allowed every 6th point. It can also be a habit, wasting some time, correcting the position or to psyche the opponent.

You will usually see that players wiping their hands on the table scream “cho!” after every point, multiplying the psyching part. Kind of a dirty tactic from many semi professionals, but honestly it’s just rather silly to be screaming and psyching while playing.

Can Only Use the Towel Every 6th Point

The number one reason table tennis players wipe their hands on the table is because of sweaty hands. The grip is worsened when sweating a lot from the hands, and therefore wiping it off in between points can be a good idea. Some players sweat more from the hands than others, so those tend to wipe their hands more.

But Why Wipe Hands on the Table?

It really only comes down to habit. Some players actually wipe their hands on their shorts or shirt instead of the table, but this of course is less noticeable. If you think about this the next time you watch a game of ping pong, you’ll definitely notice this is more common than table-wiping.

As explained previously, table tennis in particular is a sport littered with weird acts and unwritten rules. The wiping hand on the table in between points is just another one.

Table tennis is a sport that has all kinds of weird habits. Such as stomping feet when playing, screaming after points, saying sorry after an edge ball and many more. There’s no real explanation to all these habits and unwritten rules, it’s just a part of the table tennis culture.

Some players wipe their hand on the table to waste time. This can either be because of being fatigue, bored, or simply to make the game go slower.

When playing an intense point however, stakes rake up and the heat is rising. During a long rally, players are bound to get nervous. Being nervous especially increases sweat on hands, which is why you’ll see players wiping their hands on the table afterwards. Sort of to cool off, waste some time and gain back some focus.

Psyching in sports are no new thing, but it’s extra prevalent in table tennis. There are many players that do anything in their power in order to psyche their opponent, and this can be done by wiping hands on the table and masking time.

Players that wipe their hands in between points in order to psyche the opponent will typically also do other psyching actions like stomping their feet, making faces and screaming after points.

Some players are seen simply touching the table in between points. This is typically after a long rally and the player has been pushed away from the table. This little touch is just to measure the distance to the table. Doing this in between each point ensures the player’s stance is correct, and has the correct position.

Why Do Table Tennis Players Wipe Their Hands Close to the Net?

Are You Allowed to Touch the Table In Between Points?

It doesn’t interrupt the pace of the game, and doesn’t give any player an edge. Therefore it is allowed.

*Read more about legality of touching the table in table tennis here!

Who Started the Trend of Wiping Hands on the Table?

Some people believe this trend of wiping hands on the table comes from some old school pro player that used to do it. However, this is not really true as it has been seen in professional games for a long time, in a ton of different games.

There’s no real answer to who started this weird ping pong “trend”, it’s just that, a trend.

Table tennis is a sport with a ton of unwritten rules and weird habits. Wiping hands on the table is a very common thing, and it has grown to be a part of the culture. It might be hard to understand if you are a beginner, but many people just imitate others after a while. You’ll see all types of weird psyching attempts and habits when playing competitively, if you’re a semi professional you already know!