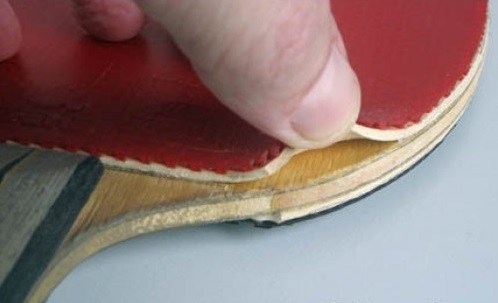 Removing a Table Tennis rubber can be a bit of a hard time. Especially if you used thick glue or did a bad job when gluing it.

Thin layers with thin water based glue are the easiest rubbers to remove. It’s a simple peel and pull of process that takes a couple of seconds.

How to Remove a Table Tennis Rubber?

Is the Removal of Pip Rubbers Different?

Removing pip rubbers can be done using the same method mentioned above. Just be even more careful when peeling it off, pip rubbers are much thinner so they’re easier to break.

Does Speed Glue Make It Harder?

Speed glue is not harder to remove from table tennis rubbers than regular glue. Although some speed glue is thicker than regular, so it can be a bit of a pain to remove it. When removing a rubber with thick glue – peel it off even slower.

What If The Rubber Is Already Loose?

If you have played with the same rubber for way too long it sometimes comes loose on it’s own (read more about how long rubbers last here). This also happens if you clip the bat against the table.

How to Remove Rubbers from Pre-built Racket

Pre-built rackets are known for having very tough glue. If you want to remove the rubbers from a pre-built bat be prepared to throw away the rubbers afterwards. Nines times out of ten the rubbers will have little pieces stuck to the blade. You will have to discard of the rubbers, and scrub off the stuck pieces on the blade.

Can the Rubber Tear When Removing It From the Blade?

Yes. If you don’t do it carefully enough small pieces of the rubber will stick to the blade. If you plan on throwing the rubber away afterwards, peel it off slowly anyway. When small pieces get stuck on the blade, they will be even harder to remove.

If you want to re-use the rubbers afterwards, you won’t be able to if small pieces tears off.

How to remove glue from table tennis rubber?

Removing old glue from table tennis rubbers can be a pain. But if you are using the right method, it’ll get off in a heartbeat. Here is the most classic method using nail polish remover:

Please note that you don’t need to remove the leftover glue from your rubbers. If this is your first time removing it and you want to re-glue it on another blade for example, you can simply brush a new coat of glue on top of the old one.

How to Remove Water Based Glue?

Water based glue is a bit tougher to remove as it has an easier time to sink into the rubber. It is still possible to remove most of it though, but it has the risk of ripping small pieces of sponge.

Can You Remove Glue From Rubber with Acetone?

Yes. Some people and even professional players out there use acetone to remove old glue from their rubbers.

You can also remove old glue from rubbers by rubbing it off. Note that doing this will take a lot of time and will be a mess. Not recommended, but it is possible with enough work to rub off the glue from table tennis rubbers with just your fingers.

How to Remove Glue from Pip Rubber?

Removing glue from pip table tennis rubbers aren’t really any different to regular sheets. Although it is recommended that you be more careful because pip rubbers are a lot slimmer. They more easily rip when getting peeled off the blade too, so be careful there.

Can You Reuse the Rubbers After Removing Them?

After removal of your rubbers, you can reuse them on another blade, or re-glue them if that’s what you want to do. Removing the excess glue before re-using them is not necessary, but if you have used them on more than two blades it is recommended.

There are some things that can limit the re-usage of your removed rubbers though. If you have had them cut exactly like your previous blade, they might be too small for your new one.

*The header picture in this article is taken from here!