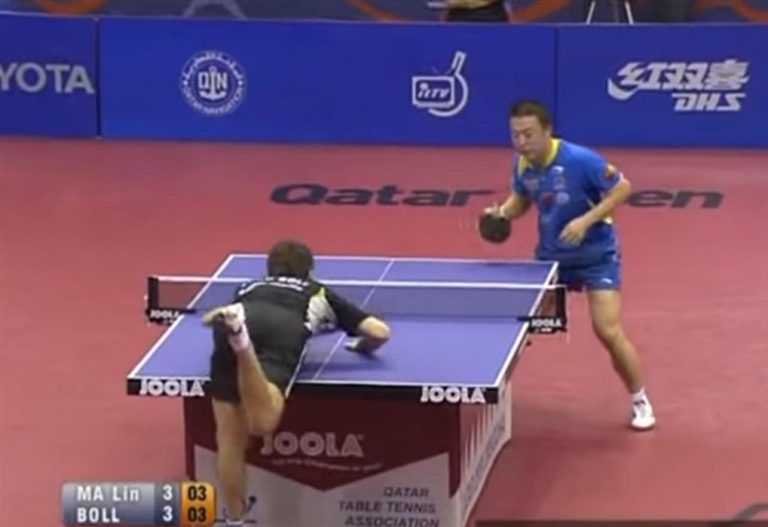 Can you touch the table in Table Tennis? What do the official rules actually say about this? We’ll explain it in this short article, including some information around this rule and tips.

There are essentially three things that you can do that touches on this rule. Touching the net, the bat hitting the net and touching the actual table. All of these have different rules and here are all of them.

Can You Touch the Table in Table Tennis?

Do You Lose the Point if You Touch the Table?

Yes, touching the table while playing a point will automatically lose your the point. This is because it can help disguise your shots, or gain extra power.

Beginner players are the only ones really ever experiencing an issue with this rule, as they feel they don’t get enough power when smashing for example, if they don’t have their opposite palm on the table simultaneously.

How to Avoid Touching the Table?

You can easily avoid touching the table. Simply get into the habit of not doing it! When reaching for that ball incredibly close to the net, just hold your opposite hand up in the air. When smashing really high up, hold your other hand around your chest to make sure it isn’t touching the table.

When getting into the habit of not touching the table, you can simply have it however you’d like, but these are tips that help most beginners when trying to lose that habit.

Some players feel they don’t get the same amount of power when not leaning against the table, this is simply not true. With the right technique, you can even hit the ball behind your back and it generates a lot of power.

Can Your Hand Hit the Ball?

Yes and no. Your free hand can’t ever hit the ball over the net and count as a point. However, you can hit the ball with with your wrist, hand, blade handle, and fingers of your racket-holding-hand. This doesn’t mean you should of course, as there is no way to calculate how the ball will land when hitting it with anything other than your rubber.

Can You Touch the Table In Between Points?

Can You Touch the Net In Table Tennis?

You are actually allowed to touch the net in table tennis. You can not touch the net, but the ball can. As long as it rolls over on your opponents side after hitting the net, it’s a legal shot.

Some people believe it’s allowed to hit the net with your bat, but it’s actually not. In non-professional competitions this rule is sometimes bent a bit though and isn’t bothered about. Unless it interferes with the game of course, or gives any player an edge.

What Happens if You Touch the Table?

In non-professional games though, this rule is also bent somewhat. Players are sometimes allowed to touch the table with their free hand if the ball is on the opponent’s side of the table. This is because it doesn’t really change anything, and it doesn’t give the player an edge.

Can the Bat Hit The Table In Table Tennis?

Your bat is allowed to hit the table in table tennis. Please note though that this will hurt your both your blade and rubber after a few hits. This is the one of the downsides if you play penhold style, it will batter the blade more.

Avoid hitting the bat on the table, it can cause finger injuries and most frequently a chip in the blade/rubber. If your rubbers have started getting loose on the edges or got chips, it’s recommended to refresh your rubbers.

Sometimes it is allowed to touch the table, and sometimes not, but it’s never really recommended. Even if it is allowed, it’s not a tactic professionals use, so why should you? If you have a habit of putting your free hand on the table currently – get rid off it as soon as possible.

Rules are rules, you have to adapt to them in order to participate in real competitions so you better get into that habit. Although some of the above rules typically get bent a bit in non-professional games, once you move up the ranks, the umpires will be tougher for sure.